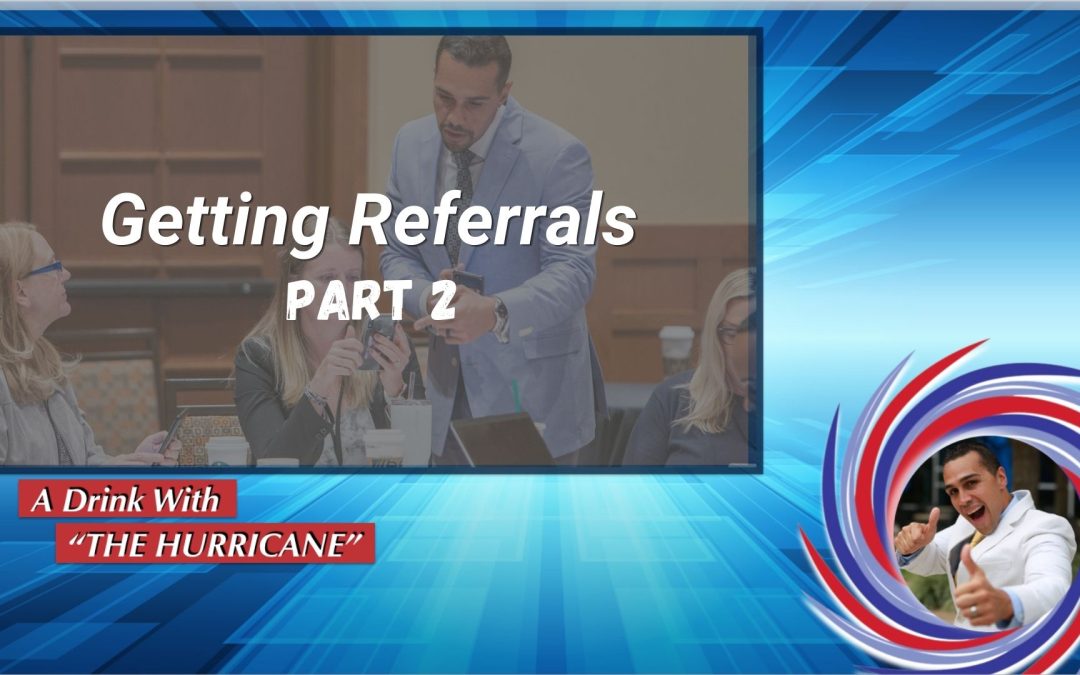 What’s up everybody, it’s Steve, The Hurricane, here and with today’s episode of “A Drink with ‘The Hurricane,'” we are gonna continue our four-part series on getting referrals. Cheers.

A lot of people tend to not wanna get in tight with this particular individual and that’s a huge mistake. And it’s something that in “The Hurricane University Program” that we offer, in the coaching programs that we offer, we really help our clients focus in on honing in on this key contact because if you can get them with this key contact, you are almost guaranteed to get referrals from that referral source, And the key contact, my friends, the administrator.

That’s right, the administrator, the executive director, the owner, the boss, that’s the most important key contact at every single referral source. Now, now why? First off, why do people avoid the administrator? I’ll tell you why. Because when you’re marketing at a referral source, especially during lockdowns, but even not during lockdowns, ’cause it’s gonna end eventually. A vaccine is coming out and people are getting it. In New Jersey here the vaccine has already been started to given out to healthcare workers. So, there’s light at the end of the tunnel of the lockdowns.

Now, I’ve had it happen to me many times over the years where I’ve had a social worker, a discharge planner, a director of nursing, who did not want to refer me for whatever reason. Because the administrator said, “His company is the best company” and I want you to work with him, that social worker referred me business. My favorite story that I have told a thousand times on stages at conferences and conventions over the years is about when I went to one of my local rehab centers here. This was an ALTEC community. They discharge 90 to 100 patients a month in a slow month for them.

I knew every person in that building and I had a brand new marketing rep working underneath and this is when I had already sold Care Choice and I was part of SeniorBridge. And my rep took this account over from me when we brought her on. And January we did a lunch and learn. Well, January, February, and March, three full months time had passed and we had not received a single referral. Now, my marketing rep was going there every single week. My marketing rep was doing a ton of collaborations with their marketing person. My marketing rep was doing so many things for that building that she was actually helping them grow their census. Which by the, if you ever wanna get in with an administrator, one of the best ways to do that is to do marketing collaboratives that help grow the census of the business you’re trying to get referrals from. It makes sense, right? This is part of “The Hurricane University” and all the things I train people.

This is why my clients are so successful. We get them to partner with their referral sources and help grow their referral sources’ revenue and the patients that are coming into their building and then they have more referrals to give my clients which is why they’re so successful, right? Help them grow. You get more referrals. That’s how you get a good relationship with an administrator. So, my rep was executing this way back in 2012. I take a look at the referral report. I realize that she’s been going there all this time and not a single referrals come over the course of three months. So, at the beginning of April, 2012, I say let’s go visit blah-blah-blah care center. I walk in the door. Now, I knew the administrator very well from years past when I was the marketing representative and I was the one coming into her accounts and she worked at a different place beforehand.

Signing in at the front desk, the administrator comes walking up and she goes, “Steve, how are you? How have you been? I haven’t seen you since January when you did that lunch and learn. We love Julie, you’re rep, she’s fantastic.” And her name was Carol and I said, “Carol, I’m so glad that you’re here at the front desk because you are the exact person I was coming to see.” And she goes, “What’s happened? What’s going, is everything okay?” And I said, “Well, no, Carol, everything is not okay. I wanted to come see you. I needed to speak to you because,” and she goes, “Are you getting referrals from us?” Like she interrupted me right in the middle of what I was saying. And I said, “No, we’re not. Since I did that lunch and learn with Julie back in January, we haven’t received a single referral. Julie’s here all the time. She’s doing all these collaborations, all these things with you to help you grow your census. And I know your census is growing, but we haven’t received a single referral. If we can’t turn things around, I’m gonna have to have Julie partner up with other people that do what you do because we need to receive, we should be receiving referrals.” And she goes, “Steve, don’t say another word. I will take care of it. Give me 24 hours.” No problem. We left, went back out, whatever.

The very next day Julie received a 24-hour, live-in referral from that referral source and it came from the social worker. Now, I have no idea what Carol said to that social worker and quite frankly I don’t care what Carol said to that social worker. All I know is we were fulfilling our end of the bargain by doing all the things that we were supposed to do from a marketing standpoint, leveraging it to get referrals and we weren’t receiving our referrals in return. That’s the power that an administrator has over the building because fast forward for the rest of that year, even though I had left SeniorBridge in June and started Hurricane Marketing Enterprises then, Julie continued to work at SeniorBridge and that became her number one referral source, generating almost a million dollars in revenue that wasn’t there prior to that conversation. Administrators are everything.

Now, if you noticed what I was saying here as I was walking you through this, right? This is what I do in Hurricane University and our coaching programs when I’m training our clients. This is why our clients are getting so many referrals. Notice what I said. We’re training our clients. We’re training you to be able to get in with administers. How do you get them with administrators? By helping them grow their census? We will teach you how to help your referral sources grow their census so that at the end of the day when somebody is getting referred home, who is the person who’s actually earning the referral, the home care company that’s asking for referrals every time they show up or the home care company that’s partnering up with them and helping them grow their census?

It’s the company that is partnering up with them and helping them grow their census. That’s why my clients are so successful and that’s how you’re gonna be so successful too when you decide to commit to investing in yourself and going through our training programs so that you can blow away the competition. This is only the second week. I got two more of these coming up so stay tuned. But, do the smart thing. Pick up the phone, click the link below, get a consultation with us, and move forward so we can help you blow away the competition. Rah, rah, rah, rah, rah.