How to Maintain Momentum with Your Referral Sources 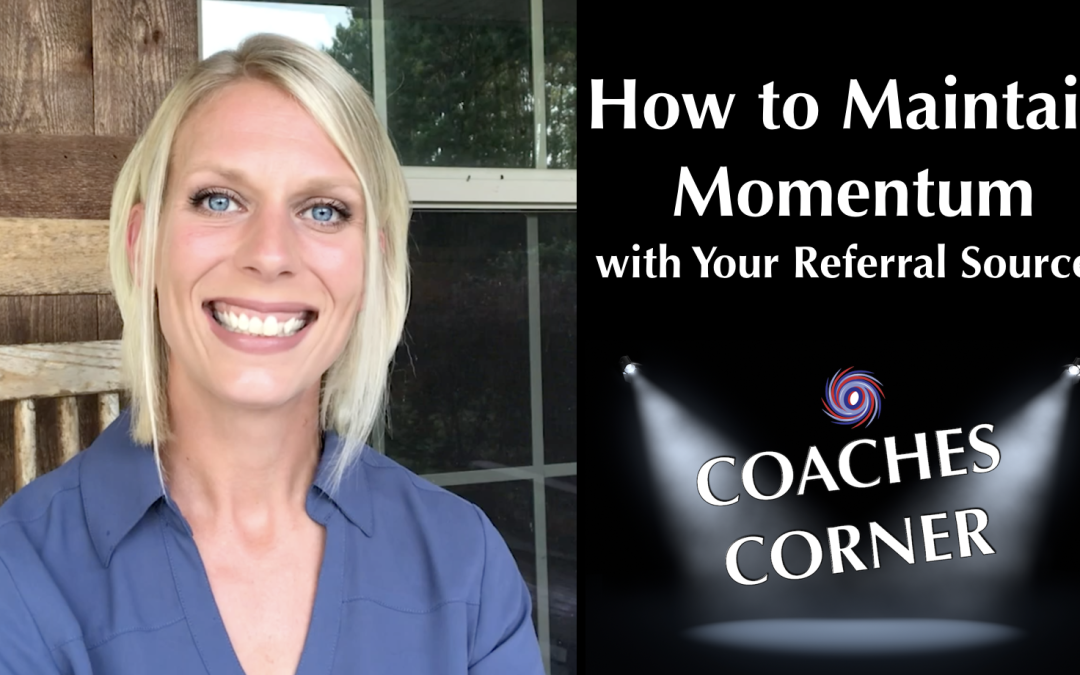 Hey guys, I’m Meghan Smith and today I wanna talk to you about maintaining momentum in your account.

So we’ve all had those accounts where we’ve got them to the point that they were sending us steady referrals, everything was going great, and then we start to see a point where maybe some of those referrals are slowing down, or they’re stopping altogether. And we start to wonder what happened.

I also want you to think about, and I’m sure that most of you can think of at least one account that you started targeting where you had a pretty good idea, or someone even expressed to you, they had an agency that they currently use that they liked, that’s who they were gonna stay with. If this became a good referral source for you, it is because you out marketed the other agency. There was somewhere that that agency faltered and you were right there to pick up the pieces and show them that you could be the trustworthy agency for them. That’s who they needed to send their business to.

I will tell you that there are several other eager, hungry marketers out there waiting for you to falter. Waiting for you to slack off, the same way that you were. So if you are starting to get complacent, maybe a little lazy for that account, maybe it’s not even that you got lazy, maybe it’s that you got so busy, that you felt like you ran out of time and just weren’t able to dedicate the attention that you did before. When this happens, you are creating the same situation that was created for you to be able to move in and take over that account and gain the referrals.

Here’s what I want you to think about. Relationships and accounts, are a lot like any other relationship that you have in your life. Whether that’s with a husband, a wife, a boyfriend or a girlfriend. What happens when you get lazy in the relationship? We start to see some cracks, it falters a little bit. Some of them fall apart altogether. Same situation guys, we have to work hard to maintain our relationships. Don’t let someone else come in and steal your spotlight. Go back to the basics.

When we see that there are, there is a decrease in referrals, or maybe that relationship is just slowing down a little bit, it doesn’t feel quite right, think about the things that you did in the beginning to earn their trust, to gain their business.

Are we still doing all of those things?

Are we taking them to thank you cards?

Are we updating them about those referrals?

The same thing that you had to do to earn the business, is the same things that you have to do to keep the business. To keep it coming in. Don’t get complacent guys, stay on top of your accounts. Show them the attention and the love that they deserve and you’re gonna keep gaining the business out of there. Thank you have a great day!