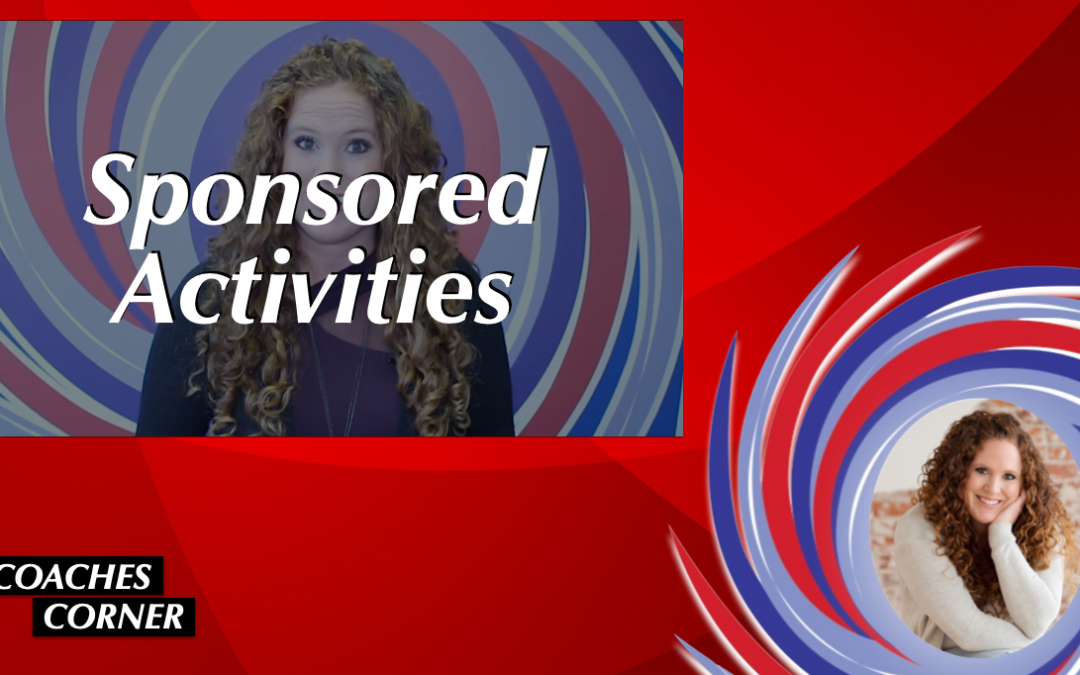 – Hi, I’m Jen Gasper, and I’m a coach with Hurricane Marketing Enterprises, and today on this episode of Coaches Corner, I’m gonna talk to you about ideas for sponsored activities.

Have you ever been thinking about the sponsored activities that you could potentially do for residents in communities and have a really hard time of coming up with something to do or something different to do month after month after month? Well, I’m here to show you a couple of wonderful examples of activities that I did in all types of communities when I was a marketer and they were received so well not only by the residents but also by the rest of the staff.

I oftentimes found when I tried to book activities with the activities director that I was more likely to get a spot on the calendar if I went in with an idea of two or three things that I was thinking about doing and getting their input on if they think that their residents would enjoy that specific activity.

The other thing that these activities let you do is there’s a very different feel when you are going into an account and just having, say, an ice cream social and nothing else. It doesn’t leave you with a lot of feel-goods to be able to go and share your experience working with the residents with the rest of the key contacts in the account.

The activities that I’m gonna role play for you and role model for you are going to give you some specific, meaningful ways that you will be able to blanket the account once the activity is over, and if that can allow you to engage in a deeper conversation with an executive director or a social worker that you’ve been able to have before, this is going to be the activities for you.

Here’s an example of an activity that I did along with an ice cream social or you can even do it a snack mix social. So just to set it up a little bit is you would want to offer to bring in all of the makings for ice cream sundaes. So supplying the ice cream and making sure you have an assortment of different toppings like M&M’s, cookie crumbles, different types of sauces that people can choose when they’re making their ice cream sundaes. If you wanted to do it with a snack mix instead, you just think of all different things that they could put together like maybe marshmallows, raisins, chocolate chips, Chex Mix, anything like that, but the point is to have lots of different varieties so it allows them choice in what they want and the way that I would run this activity is that I wanted everybody to have an opportunity to share, and so this creative little way for having a conversation while you’re eating your snack is going to allow for everybody to participate.

So now I’m gonna do some role playing. We have our residents from the assisted living community. We have Jen and we have Nick, and we’re gonna pretend that they already have their ice cream sundaes. I will give you a little tip. I did at some places make little menus that had all of the toppings that I was going to be using, and then so if you had a resident who needed a little extra assistance, they could just check off what they wanted and you could make the sundae for them so it just made it a little bit easier to remember everybody’s orders. So okay, all right, everybody has their sundaes. Hopefully you guys are enjoying them.

We’re gonna play a little game and I just want to get to know everybody a little bit better, but before we get started, I want to do an introduction since I don’t know who you all are yet. You know I’m Jen. I’m from Hurricane Home Care. I just want to do a fun, little question where I find out everybody’s spy name. Now, you’re probably looking at me like what the heck is a spy name? So it is the name of the first pet you had and the name of the first street you lived on. So if I was going to give you my spy name, my name is Jen Gasper, but my spy name is Pepper Turner. Pepper was the name of my first pet and Turner was the name of the first street that I lived on. So Jen, what’s your spy name?

– Well, the first pet I had was Max so it’d be Max Pinetree.

– Max Pinetree, I like it. That’s a great spy name, how about you?

– Your frog, a frog named Fred.

– Fred Terrace, I actually like that. I can see you hiding behind bushes or something like that as Fred Terrace. Okay, so now I just want to get to know you guys a little bit better. If you chose M&M’s as your topping, one of your toppings on your ice cream sundae, raise your hand. Jen, okay, you chose M&M’s. So this question is for you. What did you want to be when you grew up?

– I’ve always wanted to be a teacher.

– Yeah, I love kids and being able to teach the younger ones would be very special.

– Yeah, did you become a teacher?

– Very good, what was your favorite grade?

– Third, that was my favorite grade too. I went to school for elementary education. Yeah, very good. Okay, now I know she chose M&M’s. Is there anybody that really wanted to share what they wanted to be when they grew up? Yes, Nick.

– I wanted to be a professional baseball player.

– Well, where did that come from? Did you play a lot of Little League?

– I did, all through growing up, it was like I used to make haikus about baseball so yeah, it was a big love. First love of my life, baseball.

– Very good, okay. All right, so you would go around the room and you would allow as many people to answer as they want. The real reason I just hid it with a little creative way about asking them which topping is because it definitely somebody to share. So here’s another example of a question you might ask. If you chose whipped cream as one of the toppings, raise your hand. Nick, okay, so I want you to tell me what is your favorite book or movie?

– My favorite book, right now at least, is called Can’t Hurt Me. It’s a book by Dave Goggins. He’s a marine. It’s pretty wild. He’s got an amazing story. It’s very motivational at the time. Made me want to run a half marathon which I did sign up in the middle of reading the book, so I guess it worked.

– Congratulations, very good. I ran a half marathon, too. I’ve actually run three.

– It takes a lot of commitment and dedication.

– It does, training. You gotta get it ready and then gotta be prepared to be sore for the next couple days.

– Absolutely, for sure. Is there anybody else that wanted to answer that question? Okay, very good. So I have a lot of lists of different questions and I’ll just read you some examples. What was your first job and how much did it pay? What new technology have you found to be the most helpful in your lifetime and what have you found to be most annoying?

And another one that I really, really liked is what big world events were most memorable to you growing up? And I remember people telling me stories of where they were when JFK was shot or my first big world event was the trade center of 9/11 so I shared that story, and you can imagine when you’re going around the room sharing these stories and talking to people about these things, it’s a bonding experience for all of the residents and it is so fun.

I would find that an hour, an hour and a half flew by as we were having these conversations, and then what you do with the content of that conversation is once you’re done with the ice cream social and things are cleaned up, the most important part of being there is also blanketing your account. So with your key contacts, you can go and say to your executive director, hey Joe, did you know that Nick ran a half marathon? He read this book and it’s something that he wanted to do and he was able to achieve those goals.

Man, I don’t know if I could run a half marathon or have you ever run a half marathon? It allows you to break past the surface-level relationships and really, truly get to know your referral sources because referring is about knowing you, liking you, and trusting you, and by getting this bond together, that’s gonna be a great opportunity to do so. So I hope you enjoyed this idea of an activity. I do have another one to share with you in another episode.