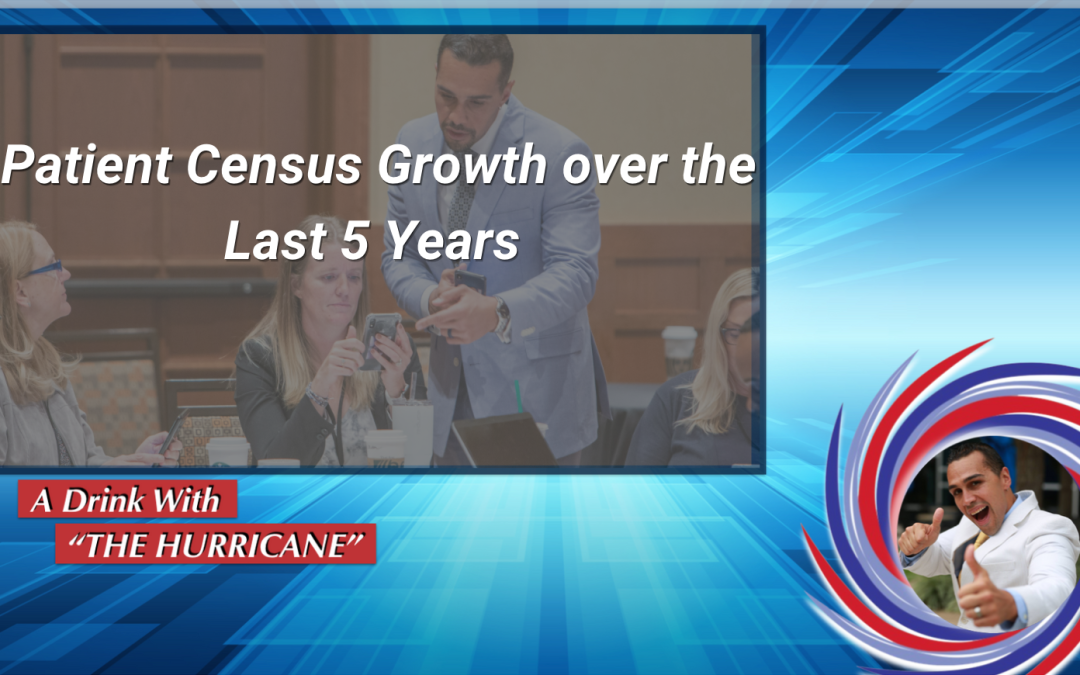 What’s up everybody. It’s Steve “The Hurricane” here, and for today’s episode of A Drink with the Hurricane I’m going to be reviewing some home care pulse data from the 2021 edition, specifically talking about the patient census growth year over year for the last five years. So raise your glasses and cheers with me. Cheers.

All right. So for those of you that aren’t aware last month, May, 2021 the home care pulse report for the year just came out. There’s a ton of information that’s covered in this. If you want to grab your copy of the home care pulse report you can do so and save 25% by using the discount code hurricane25% with all capital letters H U R R I C A N E 25% and a percent sign, right? So hurricane 25%, that will give you 25% off the full price as a discount from my partnership with Home Care Polls and a thank you to you.

Now for today’s episode I’m going to be talking about something that is more alarming than a lot of people may realize. And there’s so many factors and variables that go into it but it’s the patient census rate of growth. Now, what do I mean by census? I mean, the number of patients on your services at any given time, the rate of growth I’m going to show you the graphic right now. So let me go ahead and share my computer screen for you.

And the reason why I’m saying that this is an alarming number and, and you know it’s one thing to be like, if it was isolated like say it was, you know, 15% or 20% growth year after year for the last five years. And then because of COVID, it went down to just 5%. That would make sense to me. But the fact that, you know, for four years before COVID was even a thing it’s been on the decline and then it just got worse. This is a bad thing. This means that people aren’t growing the way that they should. And if you’re not growing your census, meaning taking care of more people, then that means your business is stagnant. And so when I look at this and again remember this is industry numbers.

This tells me that the industry has really been stagnant. These last five years. They’re not doing, they’re not taking care of that many more patients than they were before. I mean, even using a year over year. So say using that hundred, right? This would be a hundred, let’s say a hundred for this year. Then you go to this one. Now you’re at 170 a year later. Then you go to this one, this is about 114, 115, let’s say 115. Then you go here. We’ll make that an even 125. And then you go 5%, which puts you at 130, 131 over the course of five years. That’s all the growth that you’ve had. Something’s wrong in the organization. We don’t have enough referrals, our inquiry process isn’t where it needs to be. We don’t have enough caregivers. So we’re turning away cases. We’re not charging enough money for the care so that we can afford to get the caregivers because we’re afraid to raise our rates.

Why are we afraid to raise rates? Because we don’t know how to sell. You know, there’s so many variables that go into this but the reason why I’m mentioning this because this is an alarming figure to me because my clients don’t average this. Let me show you another image right now. This is what my clients average growth was. So while the industry average and you can actually see them side by side, the industry average was about 5%. My clients average 27% growth. You know, look at this.

Imagine if every single person signed on 40 patients in 2019, without being a client of mine, then they had 45, say 45 as a starting point. They did 50 the year later. But if you were one of my clients and you average at 45 you’re now taking care of 60 patients which is a 27% increase. That is an amazing thing. Now what goes into having a 27% patient census growth model? Well, this is what you want to write down as your takeaway points. Number one, a full-time marketing effort.

I know it’s hard to get caregivers and people naturally, well I can’t get caregivers, so why should I continue to market? That’s a foolish mistake. The more referrals you have coming into your business the more control you have over running your business. So continue, if not put more effort into your marketing. That’s first and foremost.

Second, invest in getting better at closing. Most companies that I find around the country when they become a client of mine this is why this is how I’m sharing this numbers and information with you. They have been relying on having a low price to sell which means they’re not really selling it’s that they are on the lower side of the average or they may be an average price agency.

And so people are like, all right, that’s fair. I’ll go with you. But the reason why I’m saying you got to learn how to sell and you want to invest in getting sales training on how to close an actual patient and manage the inquiry that leads you to closing the patient. So inquiry management training and closing training. The reason why you need that is because the third thing you have to do is you have to increase your rates.

That is the number, really, that should be number one but I’m putting it in this order because you need to have an abundance of referrals and you need to know how to close and manage those inquiries so that you can feel confident in raising your rates. If caregivers are commanding 15, $16 an hour to work you have to charge double whatever you pay your caregivers.

In another video, I’m going to spend some time going through the profit loss statements of 2020. And it was staggering to find that most agencies around the country no matter what their revenue was, are spending almost 70% of the revenue coming into their business on taking care of caregivers and compensation. That’s too much of a percentage. Now, remember what I’m saying here? I’m not saying reduce what you’re paying the caregivers if caregivers are commanding 15, 16 $17 an hour. You have to pay that. That’s the cost of doing business, but your margin needs to be double what you’re paying caregivers so that it leaves you with enough profit to run the business effectively and smoothly.

So first thing, increase the marketing effort. Second thing, invest in sales, closing training and inquiry management for your office staff so that you can manage and making sales at a higher price. Third, now that you have all your ducks in a row, raise your rates. Fourth, raise your compensation to caregivers which allows you to then finally, number five, stop turning away business because you can staff it because caregivers will take the price that you’re compensating and know that was a mouthful.

But I have been, the proof is in the pudding. 27% census growth is what my clients have averaged because I helped them with all of those things that I just said. So what I did here for you was share what you have to do in order to be able to stop turning away business and get the patient census that you want to be which obviously is going to give you the revenue the billable hours and everything else that you want in scaling and growing your business. Now, if you need help with this I want to announce a bootcamp.

Our next bootcamp is the Home Care Millionaire’s Bootcamp. It is going to be November 17th 18th and 19th, three day event in Valley Forge, Pennsylvania. The full price ticket for this event is $1000 per person. Now think about it. It’s a three-day event conference you’re flying to it thousand dollars covers it. It’s amazing, right? And it’s worth a thousand dollars but do yourself a favor as I’m announcing this right now this weekend for you go to my website, book the ticket now and if you do, it’ll be half the price, 599, literally save $400 off the full price ticket. If you buy it now, early bird special, early bird. I’m only going to do it for a month because we have to stop it at 250 people. We just did a test run bootcamp, hundred people showed up. It’s amazing. COVID is behind us. Get your booty to a bootcamp where I’m going to give you everything you need to blow away the competition.