Should You Use An After-Hour Answering Service? 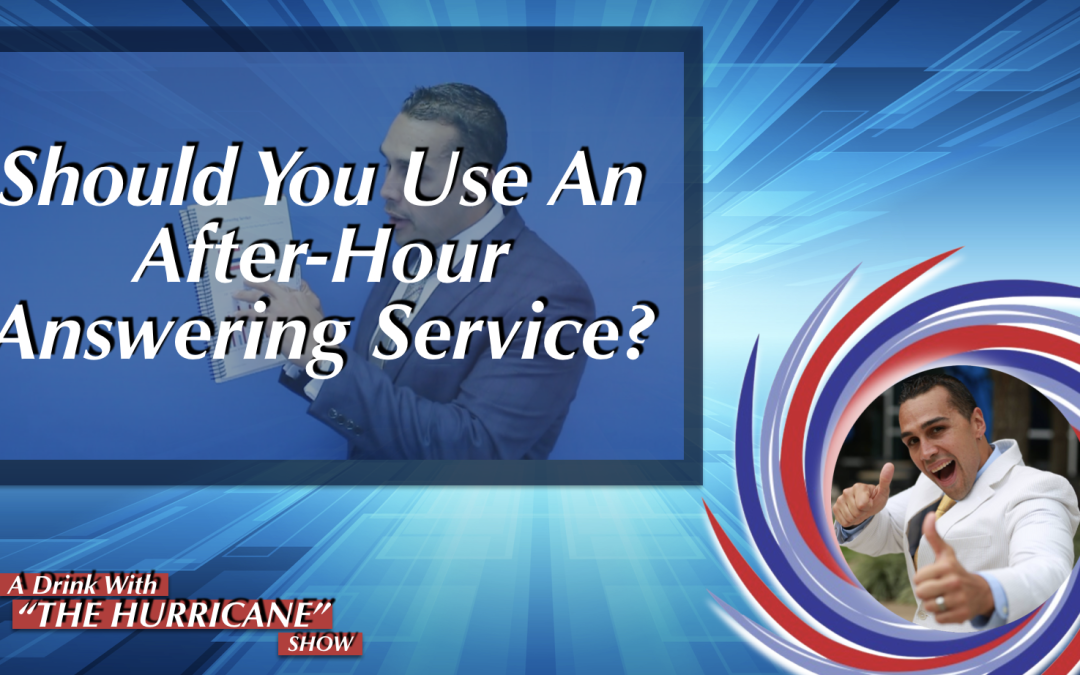 In this week’s episode of A Drink with The Hurricane, Steve discusses whether or not you should have an after-hours answering service.

P.S. Jan 7th is the last day to SAVE $300 on The Hurricane Boot Camp with the early bird special!

From Home Care Pulse, you know the Home Care Pulse Benchmarking Study (use promo code: HME15 to save 15%!), they survey over 1200, 1300 locations all around the country and the people who participated, the majority of people do not use an after-hours on-call service. 25% of the people, who are not leaders, said yes they do, but 38% of the leaders said yes. Now, the leaders represent people doing 2.8 million dollars a year in revenue and beyond. So, while the majority of leaders are not using one, significantly more leaders are over non-leaders.

What makes me think as to why it’s less than 50%, and to kind of answer the question: Do you need it?

The answer is, you need it if you’re operation isn’t properly set up. If you’re a leader, the usual leaders have around 10 full-time employees to manage enough clients and caregivers to generate 3+ million dollars in revenue. So if you have 10 full-time people, you should be paying on-call hours to your staff. Or, you could pay an agency to do it for you. So it’s not that they aren’t doing on-call, they are, it’s just that somebody in the operation is doing it.

I know back at Care Choice, we did not have an on-call service. Not until we were doing around 4 million dollars a year. What we did was the calls were forwarded and every night a different person had it. We paid $25 a night to be on call. Now, labor laws have changed, remember this was like 7-10 years ago that we were doing this. Make sure you do whatever is legal in your state in the present day when you are watching this video. But we paid $25 to for every weeknight, Monday, Tuesday, Wednesday, Thursday, and then be paid $150 to be on call over the weekend because there was a high likelihood that you were gonna get phone calls and you were going to have to work.

And because of this, my office staff, they wanted that extra money. I mean, Monday, Tuesday, Wednesday, Thursday, not much happened, and that was a great way to make an extra hundred dollars a week and get 1, 2 phone calls and have to deal with it when it actually happens. So my office staff, they used to fight over who was on call when we were smaller, as we grew and we got bigger, we actually increased it.

When I ended up leaving, over the weekend, the on-call was $250, and the on-call during the week was $50 per night, Monday – Thursday. So again, pay accordingly, do whatever it is. You don’t have to get a service, if you can do this. Now, if you happen to be in a state where it’s not feasible. I know like Washington state for example, you have to pay people per hour, whether they’re working or not, with minimum wage. It ends up being a very pricey endeavor. Then, I would say, get the on-call service. Because you have an on-call service, they handle and field 90% of the calls that come in and then you can have yourself or somebody else get the calls that come through after the fact. And then you pay that person accordingly, if you need to, and you make it happen. Cause it’s a backup to the on call. So they’re not really on call, they’re just the backup, the first person to reach.

So again, take a look at your regulations, figure out a way to do it in your state that works, and if it’s too pricey, then I recommend getting the on-call service. So, there you have it folks. There’s the tip for the week. I hope that things are going well for you.