The Number One Caregiver Complaint! 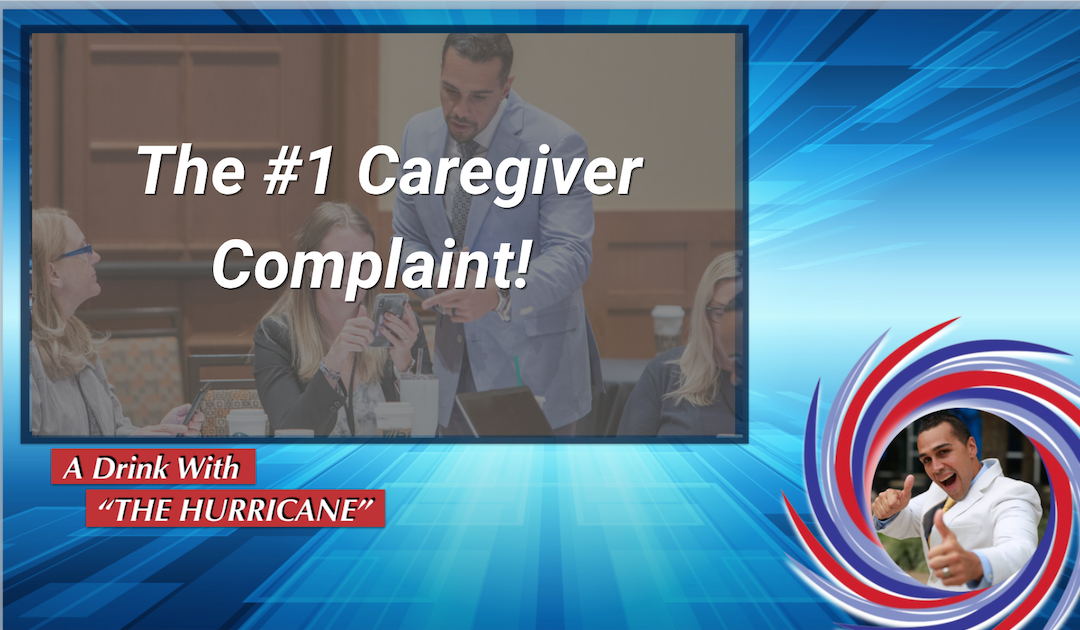 What’s up everybody. It’s Steve “The Hurricane” here, and for today’s episode of “A Drink With The Hurricane” we’re going to talk about the number one complaint from caregivers and how we can overcome it to get them to work cases. So cheers.

So here we are everybody, is the end of 2020. And if you haven’t heard yet, about the course momentum, what are you waiting for? We only have a few spots left. It’s a training on how to improve our recruiting and our retention of caregivers. This is the biggest problem caregivers face, click the link below where you can get direct access right now to all of the training modules and be a part of the very first class in January. So you can improve all of your recruiting efforts and your retention efforts for 2020 and beyond. Just do it right now, commit it’d be the best decision you make. But as a piece of that training, I wanna talk today about the biggest complaint that caregivers have.

Now you think to yourself, wait a second, wait this doesn’t make any sense. I have cases, I offer caregivers cases all the time and they say no. I give them work, they’ll want this shift they don’t want that one whatever. And so how is it that caregivers don’t want the work but they’re telling me that there’s not enough hours or it’s inconsistent and that’s why they don’t wanna work. And the reason for it is really simple. When you’re a caregiver, caregivers are gonna come in for an interview and they always tell you, they want part-time work, they want full-time work.

If we’re lucky enough to be able to successfully do that and get this caregiver working 25 hours and the caregiver accepts it and does it, then all of a sudden say, any one of those three clients say the eight hour client cancel services. Now you have this caregiver who went from 25 hours a week which is what they said that they wanted and they needed, you gave it to them, and now they go from 25 hours a week down to 17 hours to just lost eight hours of their work. And it’s hard to find another eight hour case. Not only is it hard, but also the four hours two days that that caregiver was already working which then leads the caregiver to leaving your company because they don’t have the right amount of hours that they need.

Their availability is limited as it is. And then they go work somewhere else. And then you have to restaff not just those eight hours that they’re gone, forget it but you also have to reset those other two clients they just walked off the case right now. And this is a continual problem again, and again, and again, I know as you’re watching this video right now you’re probably thinking, “Man, this is absurd. We go through this every single week.” And that’s the problem, right?

When you look at what, like think about caregivers first and foremost, caregivers don’t make a lot of money. You know they don’t make a lot of money. You probably would not be able to live on a caregiver salary unless you were working 60 hours a week and you probably wouldn’t be able to live at the lifestyle that you currently have if you’re making what caregivers make. So we got to understand that first. Second, you got to understand caregivers make a certain amount of money, and then what other jobs exist out there in the world that caregivers can get where they’re making about the same amount of money. Amazon, Walmart, with the 15 dollar an hour minimum wage movement, McDonald’s and other restaurants, there are plenty of jobs out there that fall in this just above minimum wage category. Via Uber driver. Ubers can make good money if you work at certain hours of the day.

So you look at all the jobs that are available. What is the biggest difference between all these other jobs that are available and caregivers? The biggest difference it’s shift work. So if I go to work at Amazon and I only want 25 hours a week, it’s gonna be five hours a day, five days a week, same thing we get week in week out, same hours, same schedule every single week. Maybe I might change a little bit here and there or I might ask for more hours or I might change my schedule but it’s gonna be the same. Whereas in home care we are the only industry working at 25 hours at this schedule this week and next week 25 hours in a completely different schedule. You can’t set your life up around that. That’s why this is such a problem.

Now, what is the solution? The biggest solution, and I’ve been saying this for years is to have a 20 hour minimum. I already know, I already know the complaints and the excuses and the reasons why you can’t do it. But as long as you continue to try and offer we’ll do a one hour case. We’ll do a three hour case. We’ll do a 12 hour. We’ll do anything. As long as you start, you keep doing that, this is still gonna always be your problem because there are hundreds of people that I’ve got to go and do a 20 hour minimum. Now, all of a sudden they can make it shift work because when you’re selling and signing on a new client you’re selling it at 20 hours, 40 hours, 56 hours. And there’s only so many hours of the day that those shifts can be filled.

When you interview your caregivers now, instead of saying hours of availability for work and then they have to put down whenever they’re available you could actually put in the 10 to 15 shifts that your company offers as far as services go and have them check off what shifts there are available. By doing that, now you’ve got characters like, “Oh, they understand.” You’re literally giving workforce the shifts that they’re used to at any position at their income level that they could earn. And then when you meet with prospective clients, you sell them the shifts that your company provides services.

Now the other side of it, ’cause this is where I do get these challenges every once in a while, comes in from the “Well, Steve what if somebody only needs six hours a week of home care?” Then that person doesn’t need an agency. That’s what caring.com is for. That I mean, think about it this way. If you, I’m a parent, I have three children my wife and I go out once a week, sometimes twice a week. We as it’s the holiday season right now, so we went out last week and with holiday gift shopping we were doing our Santa thing. And we went gift shopping for our kids. We had a babysitter come in. As needed, I called up our babysitter, she came in, watched the kids for four hours. We went out for a date. We went out for a dinner a couple of nights later, I call the babysitter, set it up, she came over our house for four hours. My babysitter is good because I have three kids. I gotta pay her 15 dollars an hour, that’s what a caregiver makes, right? It’s as needed, I don’t go through a babysitting agency, I go through a babysitter. You can go, I can go to caring.com and find a sitter who I then pay the salary directly, these are, that’s what those minimal hours are for as needed eight small hours.

You’re an agency. You have supervision, you hire and train your people. There’s a whole bunch of criteria, you have liability. All these things factor in the play. Take care of medically complex people who have the greatest need. Let the folks who don’t need a lot of care go direct to the caregivers through caring.com and other vehicles like the homecare.com and get the care that they need directly that route.

When somebody has got a lot of needs which there’s plenty of people with a lot of needs you focus your efforts and marketing on getting those folks. And then you get them, you take them home they need shifts, caregivers launch shifts, and there you just solved your biggest problem in attracting and retaining caregivers.

Now, I just spent I don’t know, seven, eight minutes talking to you about the biggest problem and how to overcome it. If you wanna be able to like, how do I schedule? How do I set all this up that I just said there? That’s why you have to invest in momentum. And the best part is when you look at the price ’cause it’s on sale right now you can actually get it for probably what it costs you to acquire two brand new caregivers. So two brand new caregivers for that price will solve all of my home care problems with recruiting and retention, click the link, register now, there’s only a limited number of spots left, be in that first class and then blow away the competition in 2021. I’ll talk to you soon, God bless for now. Take care my friends.