What Does It Take To Generate 3 Million in Revenue? 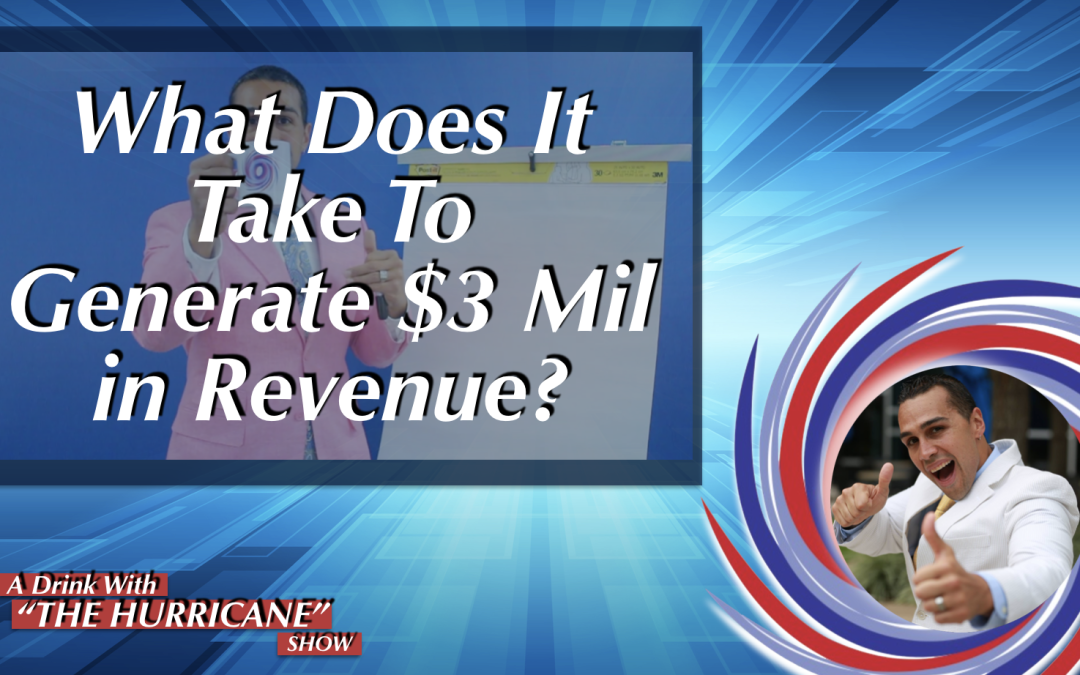 No matter where you are in the United States you can generate $3 Million dollars in a year. In this week’s episode of A Drink with The Hurricane, Steve does some home care math to show you how.

So, let’s just start off with population numbers because everything comes from the population. So, let’s use a very conservative realistic number for a service area. If I was to buy into a franchise, most franchises will give me at least this number of population density for my service area, and that’s a quarter of a million people. 250,000 people in your area. So, this is your area. Any territory has at least 250,000 people so you can easily do three million dollars and beyond. How many potential customers do I have for a private duty home care?

Going a little bit further. Now, what you want to do is how many of these 25,000 seniors in your territory will go to the hospital? This is a Medicare statistic, it’s a fact that one in three seniors Medicare beneficiaries will end up going to the hospital each calendar year. So, a third of all these people, we’ll just go for easy math here and say that’s times 33% is 8,000 people, right? So, now here’s the kick. Who are the people who are going to need help beyond what Medicare covers? Who are the people that should be paying for services beyond that Medicare benefit? And this is a little bit tricky. In another episode, I’ll talk about the exact target customer, but in all essence, it’s people with the greatest need. 20% of the population who are Medicare beneficiaries suffer from five or more chronic conditions, which means this is the sickest of the sick, the weakest of the weak, the people who need rehab, the people who have constantly in and out of the hospital, readmissions, and several admissions over and over again. They max out their benefit and everything else. Medicare spends more money on this 20% of the population than all the other percentage of the population combined. It’s almost 80% of all Medicare spending is on this 20% of the population. That’s our target customer. 20% of 8,000 people is 1,800 people. This is your target audience.

Now, the good news, out of 1,800 people, there isn’t a person watching this video right now anywhere in the United States with 250,000 people in your  territory, who could handle 1,800 new clients in a year. That’s the potential. If you were to just get 10% of the market, this is going to give you 180 new clients. And 180 new clients with the financial lifetime revenue of people who are doing three million dollars a year. I don’t have time to get into it now because I don’t want this to be a two hour long video, but you can look it up. Home Care Pulse clients are people who are doing three million dollars a year in total revenue, their financial lifetime value of a client is close to $15,000, meaning, for every client they sign on that’s $15,000 in revenue that’s generated. I’ll go on a little bit on the low side, but we’ll say about $15,000 per client. 180 clients, this will give you more than three million dollars. You can do the math. 180 times $15,000 is significantly over three million dollars. That’s your numbers. This is home care math. Numbers don’t lie.

Follow me through this. I’ll repeat this one more time for you because you’re probably like, what? What, what, what? If you have a million people this number goes up significantly. 200,000 people, 15% are seniors. That’s 40,000 seniors. 60% are on Medicare, which is what we’re looking for. That’s 25,000 of these 40,000 people. Out of that 25,000 one in three will end up going to the hospital. That’s 8,000 people. From there, 20% of those people suffer from five or more chronic conditions, which is 1,800 people. This is the population you’re looking for. If you can get 10% through your sales and marketing direct referral efforts to generate those recommendations because you got know who’s in the hospital. This is why direct referral marketing is so vital to hitting this three million dollar number. That will give you 180 new clients at $15,000 per client. It’s a little bit less than that, but just for argument’s sake, $15,000 per client, that gives you over three million dollars a year in new revenue. That’s how you do it, folks. If you want help with being able to do that, if you want help getting your 180 new clients pick up the phone. Give us a call and let us help you BLOW AWAY THE COMPETITION!